Browse the web in 3D with WRoom

I've been quiet for a while as this is summer time and I have also been working on a new idea:  a 3D web browser.

This idea is not quite new as I've been thinking about this for a few years.  In the last few weeks, I did some testing and finally found a way to do it.  The main goal was to make it easy to create a virtual space without having to learn HTML and advance Javascripting.  Then I had an epiphany:  Forget about using Chrome, Edge or Firefox and just create something completely new.

WRoom was born, late at night, on a cheap Windows 10 tablet.  It's a big experiment, but it's fun to learn new stuff while making it. 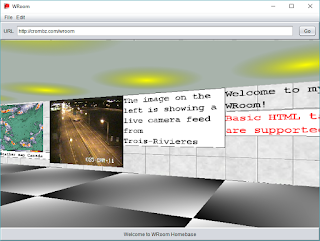 Currently, only binaries are available at http://crombz.com/wroom for testing the concept online.  You can test WRoom on your computer by downloading the WebRoom.jar file.  Java 8 Runtime must be installed as you guessed it, it's a Java+JavaFX application.

Download the JAR and execute it (double-click on the file).  You'll be presented a basic browser interface with the default URL already entered.  At the time of writing this post, the only room that is available is at http://crombz.com/wroom... ;)

Everything has been developped with Netbeans under Windows 10.

Ubuntu is able to run WRooms, but video playback do not seems to work, even with the JRE from Oracle...  This is a JavaFX issue and my be resolved in a near future.


Try it and leave your comments here or on Twitter: https://twitter.com/patrickballeux