Apple should remove some stock apps

I do enjoy the latest version of iOS released this week, iOS 10.  The upgrade process went flawlessly on my iPad 4 and on my iPhone 6.

While doing some cleanup in old apps I had on my iPad, I was shocked to discover that Photo Booth was still there, hidden in one of the folders...  Some stock apps should be removed from iOS, at least, merged into other apps or functionalities... 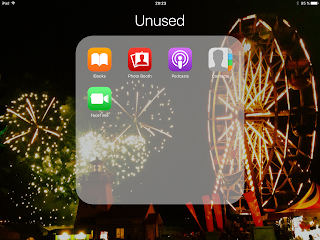 Seriously, who has even ever used this app.  With today's better alternative like Snapchat or Instagram, there is really no need to maintain this app on iOS.

I do like to read, but not on the iPad or iPhone.  I much prefer use my Kobo Glo device as it does a much better job and prevents my eyes from itching.  This app should be downloadable, like Pages or iMovie.

Listening to podcasts is not really my thing.  The feature itself should be integrated into iTunes and the Music app as a sub-section instead, making audio listening merged into a single place.  The same functionality should be also integrating into the Videos for video podcasts.  Basically, download from iTunes and listen in Music, watch in Videos...

There is no deny that we need to manage our contacts.  But we can already access those contacts from the Phone, Mail and iMessage.  Do we really need an icon to access the contacts...  Maybe it's a personal thing.

Why is FaceTime not being integrated into iMessage.  Seriously, it would make things a lot simpler and we often start a call from the iMessage app itself when texting is becoming boring...

I am not a trader, nor 90% of the population.  Why are we plagued by this app which has no purpose for the majority of users.  It is to pretend or to annoy...  I dunno...

Let's admit, it fun to play with, but has no value.  I'm pretty sure that the functionally could be accessible from the General settings for debugging purpose and that's about it.  Who would actually use an iPhone in the deep forest instead of a real compass?


Did I miss something?  Let me know by leaving your comments here on on Twitter at @patrickballeux