Recently, I've updated the source code of Crombz.com to be more flexible.  This was in the intention of creating sub-sites dedicated at different categories of videos.
With the main site, Crombz.com, two new sites have been put online:

Minecraft.crombz.com: You guess it, videos about your favorite game.
Bestfails.crombz.com: Discovering the best fails videos on YouTube.

The idea is to test my code to validate its flexibility a scalability for other purpose.  I'm not trying to replace YouTube but it's fun to interact with a major data source and use HTML5 and CSS to create a new kind of interface in pure web.  It's not an easy task but I can handle it while enjoying the challenge of making something new and fresh.

If you haven't had a look at my website, go check it out and please, share with your friends.

Will robots ever replace us?

While watching a movie with my girlfriend tonight, about robots becoming sentient, I was wondering if that scenario was plausible.  This is not about the technology or even about the possibility.  It's about motivation, human motivation. 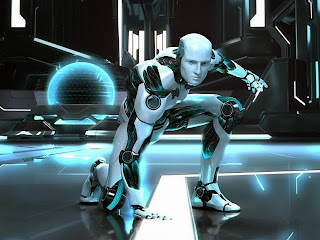 The main story is always about a civilization using robots to do the dirty work.  At least, do the stuff that we, humans, consider as annoying.  They do the dishes, take care of the dog, bring us a beer and answer the door.  You know, really important and annoying stuff.

In reality, they will probably be used...  I mean actually, they are used in dangerous works like bomb disarming or for car manufacturers to assemble auto parts faster than any meat bag.  They are not smart, but they are fast and never get tired.

Could it be possible that one day, they will get smart enough to replace us?  I'm seriously thinking that it won't happen.  Not because it's impossible to create a smart machine or that we will continue to evolve and always be superior to a machine.

The smart robots will never roam the surface of the earth simply because we won't build those robots.

For the last 10000 years, we have been creating tools to survive.  And you know what?  We're good at it.  We have found out that Information is the most critical piece, after food and water.  Humans are inextricably inclined in gathering information, sometimes to a point where basic survival instinct is put aside for a moment.

First, we created the language, then the writing.  When technology was more advanced, we were able to share information over a long distance with the invention of the telegraph and the telephone.  Today, we don't even need to talk to someone to learn something new. Just grab your smartphone and query the web.  Almost all human knowledge is accessible in just a few seconds.  We are actually at a peek where data can be acquired faster than we can process.

The next step is almost unavoidable:  making the connection directly into our brain to access available information.

If you don't believe me, consider that 15 years ago, having access to the Internet from home, on a PC, was a revolution in human history.  5 years ago, we were finally able to get access using smartphones.  The whole Internet in our pocket, everywhere and anywhere...  It wasn't close enough, today, we now can browse the web from our wrists with smartwatches.  A step closer to our grey matter.

We won't stop until we reach our synapses.  And then?  It will be about storage.  The major issue will not be accessibility but the persistence of the information aggregated.  Remember Johnny Mnemonic?  That's more likely to happen than "I, Robot" or "Automata".

The race is not about having devices doing the work for us.  It's about gathering more and more information.  The more you know, the more you are, the more you will survive amongst others...

It's already happening.  Corporations are more powerful when they know about their potential customers.  Where they go, what they eat, what they think.  Eventually this hunger for knowledge will be shared by individuals, if not already the case.  Humans will forget about robots and will put energy and money into technology that will enhance their capacity to process more and more data.  Sentient robots may never see the light of day, but the dawn of the human-machine will surely happen one day.

Hey, Hollywood!  The next block buster movie will be: Dawn of the Cyborgs!   Scarier than anything else as it will probably happen in less time than expected.
Posted by Unknown at Monday, May 18, 2015 No comments: