The new social network Crombz.com was updated today with some nice features. 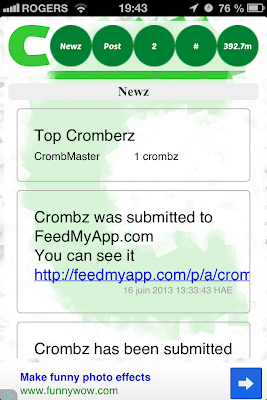 In the last week, photo upload was added when posting a new message.  Some bugs were fixed and if you load Crombz.com on your mobile device (iPhone, Android, maybe others...), you'll see the background reacting to your movement to provide a pseudo-3D effect. 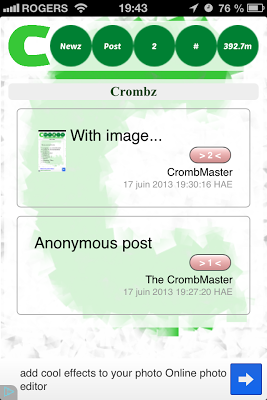 You can still view Crombz.com with your computer (works great with Chrome), but you'll only be able to see and post messages that are near your computer.  To really benefit from Crombz.com, you must use a mobile device that has Internet access everywhere (a.k.a: A Data plan).

Crombz is a new kind of social networking.  Instead of exchanging with the whole world, you interact with other users in your area.  The idea is simple:  Post a cromb (message) at a specific location (like the bus station) and anyone can see that message only at that specific location by accessing http://crombz.com.
It's like writing on any places what ever you want, without destroying anything.  Make the world, your own blog!

If no crombz (messages) are available at your current location, you can see if some other crombz are nearby.  The "Distance" will tell you how far is the closest cromb.  By clicking on it, you'll see which direction to take (assuming that your GPS Compass is pointing to the North).

There are already Facebook, Google Plus or Twitter, why another one?  None of them let's you post a message anywhere in the world.  They let you tag yourself at businesses and POI.  With Crombz, you can even post in the middle of the ocean (if the Internet access is available, of course...).

The "View Area" is around 11m in radius.  Walk around, post anywhere, leave your mark on the world...

Share Crombz.com with your friends!  Start early and be the "Top Cromber"!